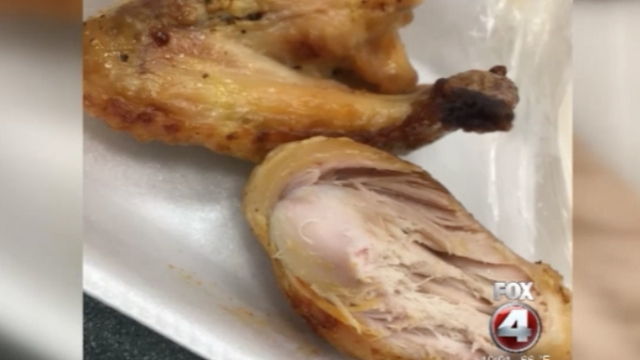 SMS
Florida Eighth-Grader Punished After Posting Photos Of School Lunch
By Ben Lawson
By Ben Lawson
March 4, 2016
A middle school student was reprimanded after she used her phone to take pictures of a school lunch she called "disgusting."
SHOW TRANSCRIPT

A Florida eighth-grader says she's being punished for taking pictures of her school lunch and posting them on social media.

"I sat down, I looked at it, and I said, 'This looks disgusting,'" Lexi Falance said.

Lexi Falance, a student at North Fort Myers Academy for the Arts, told Newsy's partners at WFTX she wanted to document the food she was given at lunch every day, which included pizza with a side of beans, and chicken that was pink on the inside.

Lexie said a lunch lady gave her permission to take the photos. But school officials say using her phone during school was a violation of its code of conduct, and she was written up for the offense.

School lunches have been a hot topic in the U.S. lately. Federal legislation required schools to make them healthier in 2012, but students don't seem to like the new meals very much.

The School Nutrition Association says 70 percent of school meal programs surveyed have taken a financial hit since the regulations went into effect in 2012 because fewer kids are buying the lunches.

This video includes clips form the U.S. Department of Agriculture and images from Getty Images.