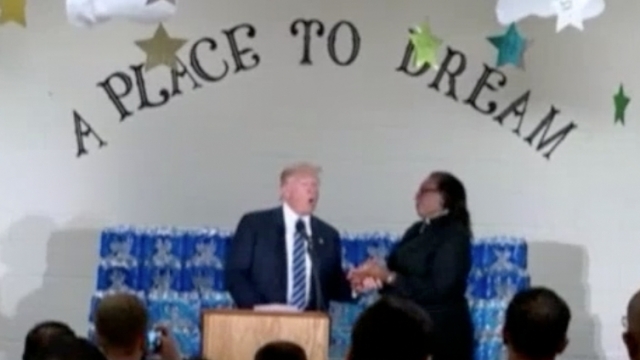 SMS
Flint Pastor Stops Trump In His Tracks After Speech Gets Too Political
By Grant Suneson
By Grant Suneson
September 14, 2016
Donald Trump's speech was stopped after a pastor hosting the event reminded Trump to stay on topic.
SHOW TRANSCRIPT

Donald Trump gave a speech at a Flint, Michigan, church Wednesday, but it's the words of the church's pastor, Rev. Faith Green Timmons, that are making headlines.

"Hillary failed on the economy. Just like she's failed on foreign policy. Everything she touched didn't work out, nothing. Hillary Clinton —" Trump said.

"Mr. Trump, I invited you here to thank us for what we've done for Flint, not to give a political speech," Rev. Timmons reminded him.

Trump was cut off again just moments later when an audience member heckled him, saying he discriminated against black people, bringing up a 1973 civil rights lawsuit over Trump's leasing practices.

But Rev. Timmons was quick to put a stop to that, too.

Trump visited Flint to tour its water plant and speak at a historically black church as part of his minority outreach efforts.