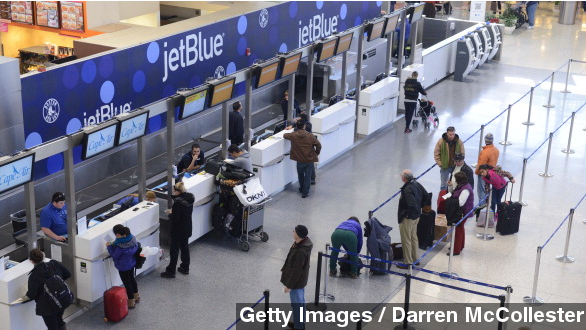 Fasten your seat belts. JetBlue's legroom is shrinking while its fees are adding up — for the first time since its debut in 1999.

Here's how it'll work: the airline's "Fare Families" will be a three-tiered system which incurs fewer fees the more a traveler pays for his or her ticket. The highest paid ticket will receive two checked bags automatically, while the lowest paid will have to fork over a fee to check bags. The airline did not reveal any exact numbers on cost yet, but it's expected the change will generate $200 million in profit, according to KMSB.

And the Airbus A320 jets will get 15 extra seats. JetBlue will shave off an inch from its roomy 34-inch legroom. However, at 33 inches, it still offers more space on average than Southwest.

JetBlue, which has marketed itself a champion of customer comfort, began its service with a free checked bag and advertising “extra room.” That mantra will continue to ring true until 2015 when the new fees are introduced.

So why change now? Several sources note it’s not a coincidence CEO Dave Barger’s departure at the start of next year is allowing this to happen.

Brad Tuttle for Money might have put it best: “In other words, the airline you fell in love with is following the playbook of airlines that everyone hates.”

Reactions from frequent fliers and the media alike have been harsh. A writer for Boston.com essentially penned a Dear John letter to the airline: “We really had hope for our relationship, but we feel like we don’t even know you anymore.”

Others vented emotions on social media and compared the airline to just another “cattle car.”

A silver lining in JetBlue’s cloud: Wednesday shares were up 4 percent after the news broke.