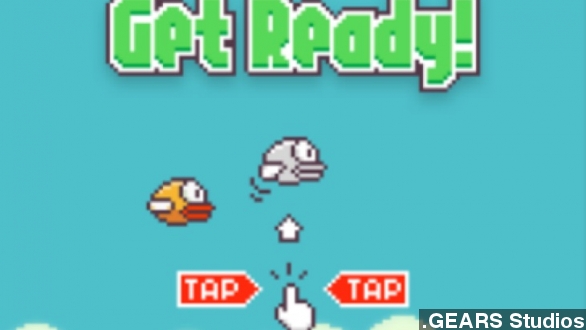 SMS
Flappy Bird Soars On App Charts
By Amy Kluber
By Amy Kluber
February 3, 2014
The addicting app recently became popular, racking up as many as 3 million downloads a day, but some are questioning the legitimacy of that traffic.
SHOW TRANSCRIPT

It's the top free app on both Google Play and Apple's App Store, and it's looking very similar to an old-school Super Mario game. (Via iTunes)

Players tap the screen to navigate a small flying bird with the goal of avoiding protruding pipes for as long as they can. As seen here, it's not as easy as it sounds. (Via IGN)

But the game has an "8-bit" of mystery surrounding it and many are wondering why it only recently became popular when it's been around since May of last year.

The game was created by a one-manned Vietnam-based game studio led by Nguyen Ha Dong, who has been avoiding the spotlight. (Via .GEARS)

He tells TechCrunch he created the game in just three days and is just as surprised as everyone else on its popularity.

Others are skeptical — even claiming Dong is using bots to artificially create downloads or reviews. (Via ​Bluecloud Solutions)

But the general consensus is that Flappy Bird is just downright addicting. As a writer for NativeX puts it: "No one wants to get owned by a game that's got nothing to it. Players keep coming back to prove they are better than this remedial game."

Flappy Bird is getting as many as 3 million app downloads per day and is monetized by in-app banner ads.