Fla. Couple Selling Home For $1, You Just Have To Move It 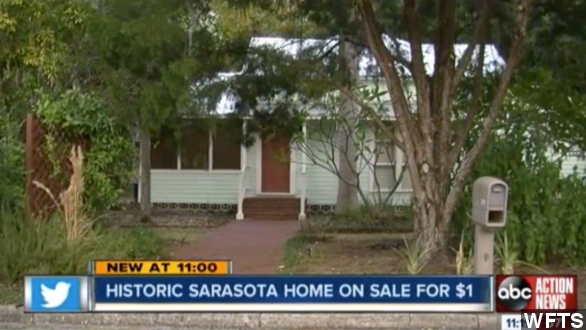 SMS
Fla. Couple Selling Home For $1, You Just Have To Move It
By Matt Moreno
By Matt Moreno
November 6, 2014
The Henrys like the lot the home sits on, just not the house itself. They don't want to demolish it, so they're looking for a buyer for $1.
SHOW TRANSCRIPT

We've heard of getting a good deal on a home, but this is a one-of-a-kind deal!

JULIE HENRY VIA WFTS: "One dollar."

So the Henrys bought the Sarasota, Florida, home and lot for $605,000 months ago without seeing it first. When they finally did see it, they decided the home just wasn't for them.

BOB HENRY VIA WFTS: "It's got a lot of history to it, and we thought, well, why don't we see if we can't find somebody that would like to salvage this home and move it?"

They still like the lot and don't want to see the house demolished. They want someone to literally move the house. And that won't be easy.

AOL writes the house is "too tall and too wide to roll down local streets. So the new owner must take off the roof, saw it in half or in thirds, and move it at 3 a.m. so local police can hold up traffic lights and power lines as the house rolls to its new home."

All of that, according to the real estate agent representing the home, will cost about $130,000.

Located at 1215 Pomelo Ave., the house resides in one of the area's more historic locations and sits within walking distance of the Sarasota Bay.

The Sarasota Herald-Tribune explains the home used to belong to the Silvertooth family. Lynn N. Silvertooth was a prominent judge in the area, and the Sarasota County Judicial Center is named for him.

The Henrys say they want the house to be moved by the end of the year so they can start on their new home in February. If a buyer doesn't move it, they say, it will have to be demolished. So who can give them a lift?