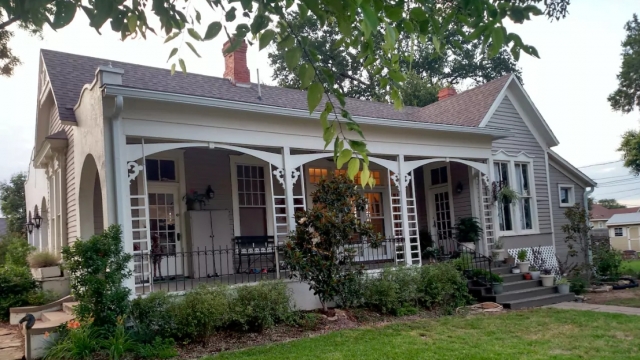 By Katherine Biek
August 18, 2016
One "Fixer Upper" home is listed for $1,277 per night on rental site VRBO.
SHOW TRANSCRIPT

The stars of HGTV's "Fixer Upper," Chip and Joanna Gaines, turn run-down old homes into the prettiest ones on the block.

Now some of those dream homes are showing up on rental sites like Airbnb and VRBO, which stands for "Vacation Rentals By Owner."

One couple, Dave Morrow and Marla Hendricks, ended up purchasing another house in Waco to live in and putting their "Fixer Upper" house on Airbnb after people actually started driving by their home just to take pictures of it.

They ask for $250 per night for the three-bedroom, two-bath house.

Another "Fixer Upper" home, the "Barndominium," goes for more than $1,200 a night on VRBO.

A writer for The Verge says, "'Fixer Upper' houses make the perfect Airbnb rental units even without the element of fame: they're beautiful, impersonal, and very clean-looking."

But as the Waco Tribune-Herald reports, not all homeowners who have participated in "Fixer Upper" did so with the intention of immediately putting the finished product on a rental site.

A spokesman for the Gaineses says the design duo doesn't have an issue with their clients putting their homes on rental sites.

But the couple will be having clients sign a stricter contract from now on, a spokesman told BuzzFeed. In a statement, they said: "We want to do remodels for clients' homes. That's the true intent of our show, and we want to ensure that does not get lost in this new vacation rental trend."

They continued: "What started off with perfectly understandable intentions could cast a shadow of a doubt on the much bigger picture, and we are going to do our best to protect that moving forward."