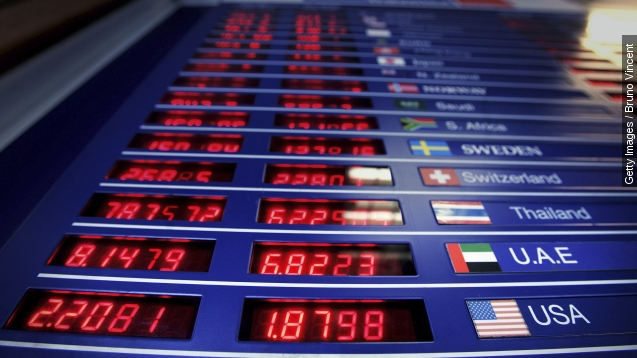 SMS
Five Big Banks Owe Billions For Currency Exchange Scandal
By Evan Thomas
By Evan Thomas
May 20, 2015
Five large banks have been fined over $5 billion after pleading guilty to crimes that relate to manipulating the foreign exchange market.
SHOW TRANSCRIPT

Five of the world's largest banks have been fined a total of more than $5 billion for manipulating the rate of worldwide currency exchanges.

This is the latest move in an investigation that started in 2013 and has, so far, led to close to $10 billion in fines.

The case hinges on a daily market freeze called "the fix," which takes place at 4 p.m., London time. It's designed to give traders exactly one minute to look at how various currencies are doing against one another, without any of them changing.

"The rap is these London traders have been colluding with each other, giving themselves names like 'The Cartel,' 'The Mafia' and 'The Bandits' Club.'" The New York Times' David Gillen explains.

"It is perhaps fitting they chose that name, as it aptly describes the brazenly illegal behavior that they were engaged in on a near five-year basis," Attorney General Loretta Lynch said Wednesday.

The traders were supposedly communicating in online chat rooms and conspiring to change the exchange rate at the last minute.

This is potentially a much bigger deal than insider trading because even the largest stock market is tiny compared to the amount of money each day that flows through currency exchanges.

Trading in the New York Stock Exchange averages $153 billion a day. Compare that to $5.3 trillion dollars in currency exchanges.

The fines are record amounts, but what's really changed? Is this just dinging the monolithic bank industry?

As The New York Times reports: "For the banks, though, life as a felon is likely to carry more symbolic shame than practical problems. ... The banks have obtained waivers from the Securities and Exchange Commission that will allow them to conduct business as usual."

Multiple outlets report banks fired or suspended various traders and officials as the investigation unfolded. But so far, the Justice Department hasn't indicted any traders or sales employees.