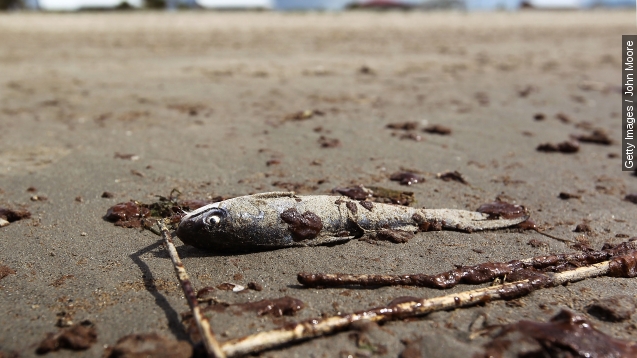 The oil killed more than 250,000 animals, including seabirds, mammals and fish. (Video via CNN)

After the spill, the herring fishery collapsed. Now scientists have an idea why. (Video via NBC)

Crude oil is really bad for fish. The most immediate effect it has on them is suffocation, but it also does long-term harm. (Video via RT)

The researchers found exposure to relatively low levels of crude produced substantial heart defects in the fish, making them slower and more vulnerable to predators. (Video via YouTube / beamreach)

The kicker is that externally the fish seem fine, so the effects show up in the vulnerability of the population as a whole. (Video via Virgin Bay Sea Food Co.)

With a Shell oil platform en route to exploratory drilling in Alaskan waters, the research is increasingly relevant. (Video via KOMO)

The fears that led to protests of the oil rig in Seattle are that more drilling means more chances of a spill in a sensitive area. (Video via KIRO)

And as President Obama illustrated during his visit to Alaska last week, salmon is a critical food source for many rural communities there. (Video via The White House)

The researchers say their paper emphasizes that the impact of an oil spill is often underestimated and can last long after the oil has been cleaned up.