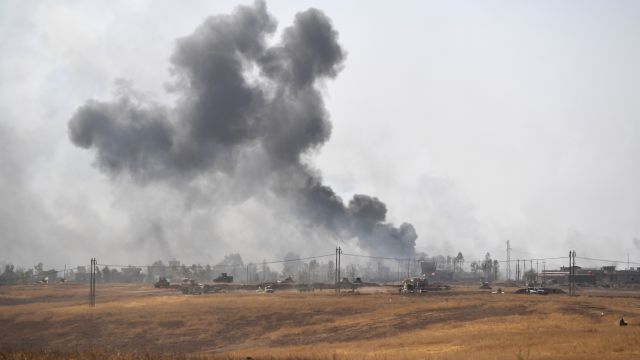 SMS
US Service Member Killed In Mosul Offensive
By Lindsay Gloor
By Lindsay Gloor
October 20, 2016
The American has yet to be identified, but U.S. officials say he died from injuries caused by an IED.
SHOW TRANSCRIPT

A U.S. service member was killed Thursday near Mosul, Iraq.

Not many details have been released, but officials told Fox News the American was critically injured when his vehicle ran over an IED. He later died from his wounds.

The service member was the first American to be killed as part of the large-scale military offensive on Mosul, which is one of the last urban ISIS strongholds left in Iraq.

This is the fourth U.S. combat death in Iraq since troops were deployed to assist in the fight against ISIS in 2014. Roughly 5,000 troops are stationed throughout Iraq, and 100 of those are working closely with the Iraqi military in the Mosul offensive.

To prepare for the fight, militants filled the city and villages around it with roadside bombs and other booby traps to slow U.S.-backed Iraqi forces.

Pentagon Press Secretary Peter Cook told reporters Monday, "There are Americans in harm's way as part of this fight."

ISIS has lost some ground north and east of the city since the operation began. But the battle is expected to be lengthy and require thorough street-by-street sweeps.