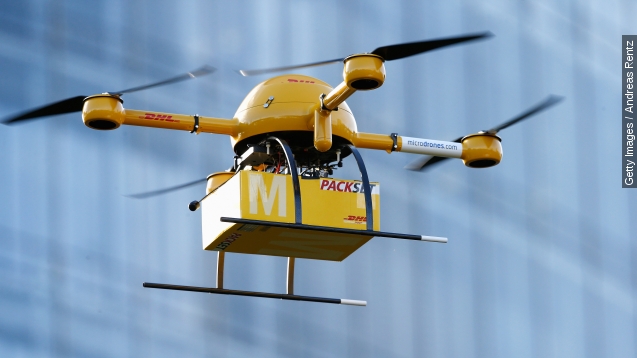 A successful touch down in Virginia marked the first drone delivery in the U.S.

A Flirtey drone carried medical packs the final mile from an airport to an isolated, rural pop-up health clinic in Wise County, Virginia. And did so in under three minutes.

The recipe for success in drone delivery: a combination of approval from the Federal Aviation Administration and a potentially life-saving delivery. Because who can say no to medical deliveries?

But in recent months, the FAA has said no to some drone use. Remember this ad ahead of the Super Bowl?

The FAA is having a hard time deciding what types of regulations to put on drone use. And matters in California aren't making that decision any easier.

"Action is now being taken to prevent drones from interfering with firefighters in an emergency. It happened again last Friday as crews battled the fire that burned cars on the 15," reports KGTV.

Two new bills in California are in the works to ground drones in the event of emergencies. So, how do large companies like Amazon plan to get around the FAA in their quest to implement delivery drones?

The answer is a bit murky. Recreational drones are given the thumbs up, yet commercial drones are not. In May the FAA labeled Washington, D.C., as a "no drone zone," citing personal and national safety as the reason.

Furthermore, the Wall Street Journal said: "The FAA’s proposed drone rules, expected to be made final next year, prohibit flights over people, in cities and beyond sight of the drone's operator. The rules would also prohibit drones from carrying objects."

Not so good for Amazon. The company is testing the new Amazon Prime Air product designed to deliver packages to customers in just a half-hour.

But Amazon is not giving up. In a petition to the FAA, company execs asked for an exemption from the agency's ban on the use of commercial drones.

For now, as the FAA tries to put drone use in its place, expect to receive your goods the good ol' fashioned way.