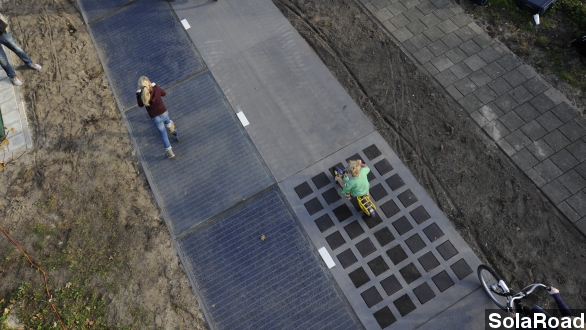 The first solar bike lane in the world is up and running in the Netherlands, but the jury is kind of still out on solar roads.

A group called SolaRoad officially opened the bike lane Wednesday in the small town of Krommenie. It measures in at a mere 230 feet because it's actually just a prototype. (Video via RTV N-H)

Solar cells are sandwiched between a concrete base and a glass covering, which is textured to provide traction for the bike wheels. The cells generate power, which is then fed into the grid. (Video via SolaRoad)

The road will now undergo a three-year test period, during which the makers will take measurements on how much energy the path produces and further gauge the practicality of solar road technology. (Video via Zoomin.TV)

By all accounts SolaRoad is the first time anyone has implemented this kind of solar technology, but if it sounds familiar, you might remember this viral video from earlier this year.

An Idaho couple put out a video proposing roads that didn't just generate solar power but also had LED lights and heating elements.

The Brusaws' ambitious goal of replacing highways with their solar roadways earned them a whopping $2.2 million on Indiegogo, out of a $1 million goal. It also earned them some vehement criticism. (Video via General Electric)

DAVE JONES, EEVBLOG: "They just, I don't think, have thought about the basics, or they've just plain ignored them. ... They claim that this is all proven and they've tested it, but where's the data? Where's the evidence?"

A number of engineers argued the idea was impractical for a litany of reasons, especially the price of construction. Because of the thick glass and angle toward the sun, the panels would be inefficient and it would take too long to pay back the cost.

The bike path in the Netherlands cost some $3.7 million, but the developers hope by the time it reaches its final length of 328 feet, it will be able to power three homes.