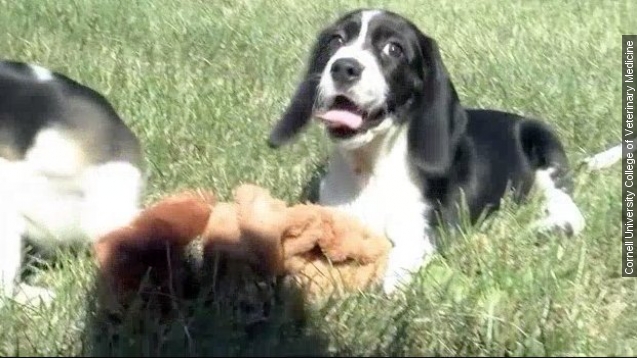 The first human was born via in vitro fertilization in 1978. And since the mid '70s, scientists have tried, and failed, to do the same with dogs.

That is until seven puppies conceived using IVF were born in July, according to a press release by Cornell and Smithsonian Institution researchers. Some of the puppies were pure beagles and others were a beagle-cocker spaniel mix. (Video via Cornell University College of Veterinary Medicine)

In vitro fertilization involves fertilizing an egg with a sperm in a lab, and then transferring the embryo into a female host. (Video via Cornell University College of Veterinary Medicine)

Part of the challenge was female dogs' reproductive cycles, which are very different from those of other mammals. The researchers had to experiment with the amount of time they waited to let the eggs mature in the host mother before taking them to the lab, and also with the narrow time frame in the reproductive cycle available to return the embryos to the mother in order for them to develop further. (Video via Cornell University College of Veterinary Medicine)

Their paper, published in PLOS One, notes it's a huge step forward for the goal of gene editing. The researchers hope to one day be able to identify genes that cause disease and replace them with healthy ones before birth. (Video via Cornell University College of Veterinary Medicine)

Since 350 heritable traits, or disorders, found in dogs are identical in humans, future research on stem cell transplantation and gene therapy on dogs could bring more direct benefits for humans.

And the work might even help save endangered species, like African wild dogs, with the ability to freeze eggs and sperm, allowing for artificial insemination.