Clinton Dominated First Debate, But What Does She Have To Show For It? 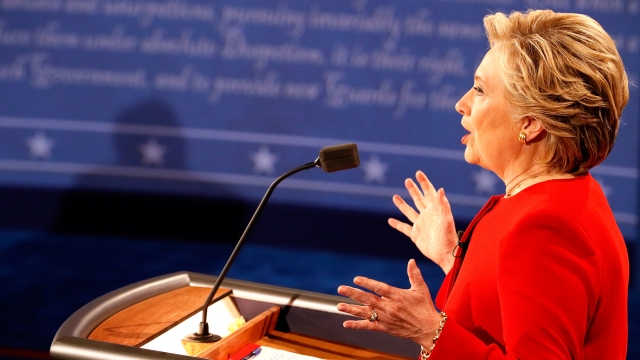 SMS
Clinton Dominated First Debate, But What Does She Have To Show For It?
By Ryan Biek
By Ryan Biek
October 4, 2016
According to a new poll, Hillary Clinton's lead is virtually unchanged after the Sept. 26 debate.
SHOW TRANSCRIPT

Many are saying Hillary Clinton won the first presidential debate, yet it's had virtually no effect on her national poll numbers.

A new poll shows Clinton with a 6-point lead over Donald Trump. That's pretty much the same as her 5-point lead before the debate.

And it's a little surprising, especially when you look at this Washington Post/ABC News Poll. The percentage of voters who said Clinton won the debate was 35 points higher than those who said Trump did.

In the past six presidential elections, the debates haven't affected the outcome of the election. This may just be part of that trend.

But Clinton may have made progress in other ways. Stat news site FiveThirtyEight focuses on state polls over national polls, and it gives Clinton at 72 percent chance of winning the election — a 17-point jump since the debate.

FiveThirtyEight compared it to a basketball game, where the opposing team scores with a minute left. Even if Clinton's boosts in the polls are small, with election day approaching, they're harder for Trump to overcome.

Trump has an uphill climb, but it's still not an impossible deficit. The second presidential debate is Sunday.