First Case Of Sexually Transmitted Zika Virus Confirmed In US 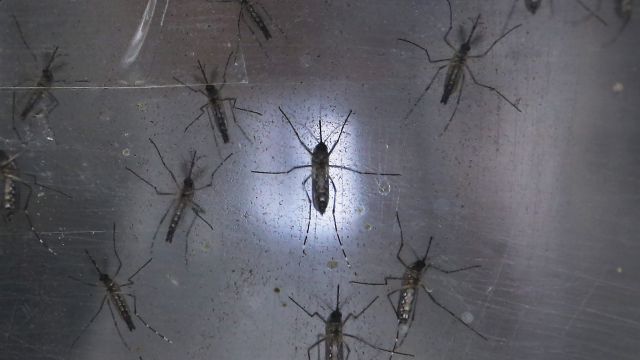 SMS
First Case Of Sexually Transmitted Zika Virus Confirmed In US
By Katie Link
By Katie Link
February 2, 2016
On Tuesday, health officials confirmed being bitten by a mosquito isn't the only way to contract the Zika virus.
SHOW TRANSCRIPT

Health officials in Texas have confirmed the first case of the Zika virus acquired through sexual transmission.

Dallas County health officials made the announcement Tuesday after confirming the case with the Centers for Disease Control and Prevention.

The county tweeted the infected person had sex with someone who acquired the mosquito-borne virus in Venezuela and who had recently traveled back to the U.S.

On Monday, the World Health Organization declared the Zika outbreak a global health emergency; a label only used a handful of times in the past.

Most infected individuals only suffer a mild fever, skin rash and joint pain. The real concern lies in what the virus could do to unborn babies.

Experts are concerned a sharp rise in reports of babies born with microcephaly, a condition that causes babies to be born with unusually small heads and brain damage, could be linked to the Zika virus.

According to CNN, prior to this case, there were only two other known cases where the Zika virus was passed through sexual transmission.

The director of the CDC told CNN: "The virus is in the blood for about a week. How long it would remain in the semen is something that needs to be studied, and we’re working on that now."