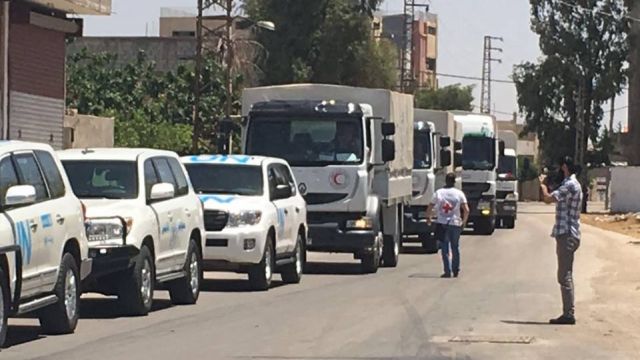 SMS
First Aid-Convoy To Reach This Syrian City Since 2012 Didn't Have Food
By Jake Godin
By Jake Godin
June 3, 2016
The city of Daraya, Syria, has been under a government siege since 2012. So why didn't the first aid-convoy in four years bring any food?
SHOW TRANSCRIPT

This is the first aid-convoy to enter Daraya, Syria, since 2012.

But there was one problem: It didn't have any food.

Instead, it had lice shampoo, sand-fly nets, birth kits and powdered milk.

Daraya has been under siege by the Assad regime for years. About 4,000 people are still there, and they have little access to food.

The United Nations hasn't ruled out air drops, but those would be complicated in urban areas. Daraya is only about 5 miles from Syria's capital, Damascus. The U.N. says it also needs to get permission from the regime.

That's the same regime that has been sieging and shelling Daraya.