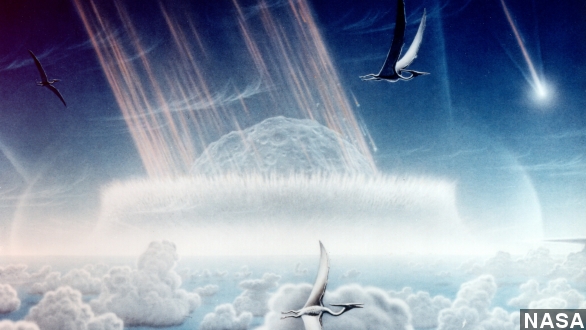 A new study suggests the mass extinction that killed off the dinosaurs millions of years ago actually didn’t involve enormous firestorms.

The Cretaceous-Paleogene impact, or K-Pg impact, is widely understood by scientists to have triggered the deaths of a wide range of plants and animals some 66 million years ago.

What’s thought to have been a comet or large asteroid slammed into Earth, drilling a crater that’s now buried underneath the Yucatan Peninsula in Mexico. (Video via The History Channel)

Scientists believed subsequent firestorms and a planet-wide cloud of airborne particles cut down on available sunlight and destabilized the food chain. (Video via Discovery)

But new evidence suggests there were no global firestorms.

Researchers at the University of Exeter didn’t address the impact of potential dust clouds, but they did attempt to recreate the very hot conditions near the impact site.

The scientists found that while it was severe, the heat pulse near the impact site lasted less than a minute: not long enough to set living plants on fire.

But farther away, temperatures climbed for about seven minutes, and it was hot enough to cause combustion.

Exeter professor Dr. Claire Belcher explained, "the heat was more likely to severely affect ecosystems a long distance away, such that forests in New Zealand would have had more chance of suffering major wildfires than forests in North America that were close to the impact."

Either way, the research suggests fires never got to the planet-consuming stage.

"Our experiments imply that 'global firestorms' were not an immediate consequence of the K–Pg impact, and we argue that local wildfires and a single phase of thermal stress cannot lead directly to mass extinctions in plants."

The Exeter team has published its findings in the Journal of the Geological Society.