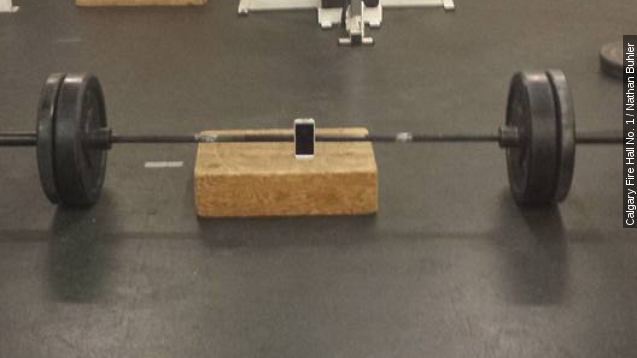 This is Nathan Buhler.

"You ever watch the movie?" Buhler asked Newsy on Skype.

Why, yes we have.

Anyway, where were we? Oh yeah. So Buhler was floating down the Bow River in Alberta, listening to music on his phone.

Then the music stopped. And it wasn't because his battery died.

"I thought, 'Should I even bother going after it?' I thought, 'No, 'cause it's in the river. It will never work again even if I do find it,'" he said.

But he was wrong. Fifteen days later, a mysterious post came up on his Facebook wall. It was a post, from himself, of a group of firefighters ... that he didn't publish.

"I thought maybe a friend or somebody was pranking me. ... Lots of people knew that I had lost my phone," Buhler said.

But then, the firefighters, who had gotten onto Buhler's Facebook through his now-revived phone, posted again on the same thread:

"Nathan this is your Samsung speaking. The fireman have been so nice to me. They're showing me around the hall and even gave me a nickname (Hector Sanchez)."

Hector Sanchez got to ride in the fire truck — buckled up, of course.

He used the fire hose.

Then, break time! Lunch. Best meal of the day.

Then, Sanchez obviously had to work off that meal and pump some iron — aka "getting jacked." He also won at pingpong 'cause why not?

Buhler went to Calgary Fire Hall No. 1 to get his phone. He said when he first walked in, the place was eerily quiet.

Then the fire alarm rang, and fun time was over. And now, Buhler has two phones. He had gotten a new one before the firefighters told him they found his old one.

And a special thanks to Buhler for giving Newsy his first video interview. That was awesome.

This video includes images from Calgary Fire Hall No. 1 / Nathan Buhler and music from Kevin MacLeod / CC BY 3.0.