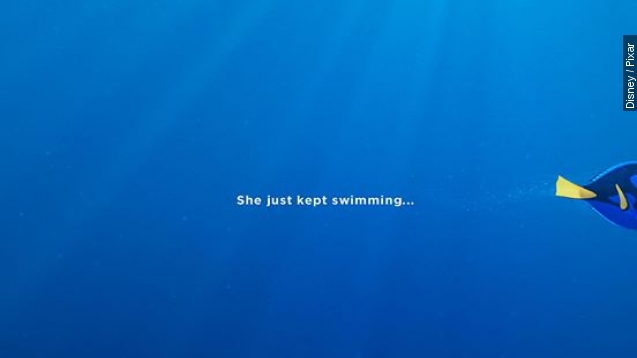 We finally have our first look at "Finding Dory," and it looks like everyone's favorite absent-minded fish is going on an adventure.

The trailer doesn't tell us too much about the plot of the movie. Nemo and his dad, Marlin, are back together, and Dory is a sleep-swimmer who ultimately realizes she needs to find her family. Whether she'll remember that plan or not, we're just not sure.

If you'll recall from the first film, Dory's "just keep swimming" attitude helped motivate Marlin to find his lost son. And since the original film's release in 2003, the catchphrase has taken on a life of its own.

"Despite the cancer you're going through, how do you stay so positive?" Ellen DeGeneres asked 13-year-old cancer patient Talia Castellano.

"And I'll keep telling you that, too," Ellen responded.

Ellen DeGeneres is, of course, reprising her role as the voice of Dory in the film.

It's expected to hit theaters June 17, 2016, and we're excited to see what the forgetful fish has in store for us.