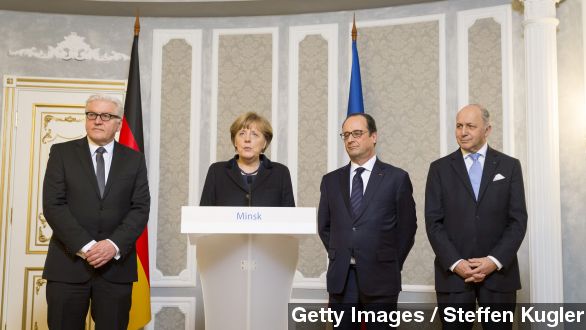 SMS
Fighting Threatens Ukraine's Latest Go At A Cease-Fire
By Jake Godin
By Jake Godin
February 14, 2015
A cease-fire between Ukraine and pro-Russian separatists starts on Sunday, but intense fighting in Eastern Ukraine is casting doubt on the deal.
SHOW TRANSCRIPT

“We are very concerned about continued fighting along and beyond the line of contact, including in heavily populated civilian areas, and reports of additional resupplies of tanks and missile systems coming across the border from Russia in the past few days,” said U.S. Department of State spokeswoman Jen Psaki on Friday.

The cease-fire world leaders so carefully pushed for earlier this week may be at risk. On Thursday, European leaders announced that a Minsk cease-fire deal was reached between Ukraine and pro-Russian separatists. It’s set to begin on Sunday. (Video via The Kremlin)

And yet, if anything, fighting has appeared to have intensified.

Ukraine’s deputy defense minister says the rebels want to take two key cities before the cease-fire begins — Debatlseve, a key railroad hub surrounded by separatist forces and Mariupol, a port city that, if captured, would give Russia a land bridge to the Crimean peninsula.

The increased fighting has politicians and analysts alike doubtful the cease-fire will hold up when it’s supposed to go into effect at midnight.

“Nobody has a strong belief that the peace conditions which were signed in Minsk will be implemented strictly." (Video via Ukraine Today)

The U.S. has also cast its doubts along with the OSCE, an international monitoring group due to start working to ensure the cease-fire is implemented by both sides on Sunday. Both noted the presence of unmarked military vehicles in Eastern Ukraine. (Video via Ukraine Ministry of Defense)

“Obviously, we are leading up to it, but these actions are certainly concerning and do violate the spirit of the agreement," Psaki said on Friday.

A BBC correspondent in the embattled separatist-held city of Donetsk says there doesn't seem to be any optimism the cease-fire will actually take effect given the failure of the last truce in September. (Video via News-Front)

For its part, Russia has denied it has the ability to enforce the cease-fire by claiming it has no part in the conflict.