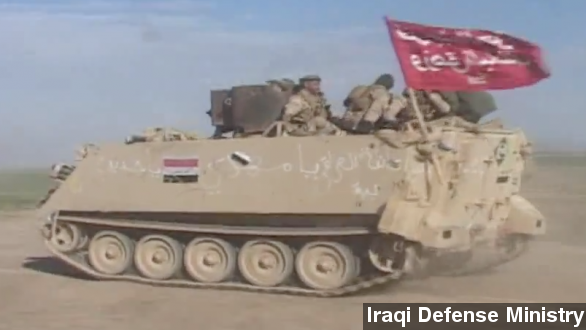 SMS
Fighting ISIS Could Drive Iranian Wedge Between U.S., Iraq
By Kate Grumke
By Kate Grumke
March 5, 2015
The U.S. isn't helping Iraq in the battle against ISIS in Tikrit, but Iran is. A former U.S. official says that could drive the countries apart.
SHOW TRANSCRIPT

Some 30,000 Iraqi troops and militia fighters are in their fourth day of battle in an attempt to take back the city of Tikrit from ISIS. (Video via Iraqi Defense Ministry)

The city was overrun by ISIS militants last year, and multiple attempts to retake it have proven unsuccessful.

The U.S. is sitting on the sidelines in this fight, but Iran is not. The country is playing an increasingly large role in Iraq's fight against ISIS.

Things have been a little tense between the U.S. and Iraq ever since the U.S. disclosed plans to take back Mosul in the spring, only to backpedal this week and say Iraqi troops wouldn't be ready until fall.

"It is mystifying that a U.S. military command would release the who, what, when of a pending operation," said retired general Jack Keane.

An aide to Iraqi Prime Minister Haider Al-Abadi told the New York times, "If the Americans continue procrastinating about the time it will take to liberate the country, Iraq will liberate Mosul and Anbar without them."

Former CIA Deputy director Michael Morell told CBS Iran is the most effective fighting force in Iraq but there is a downside to that.

"There's a real risk here that over the long run we can defeat ISIS in Iraq, but we might hand Iraq to the Iranians, in a diplomatic sense," Morell said.

If the two countries' troops succeed in taking back Tikrit, they will then set their sites on Mosul. The White House said Wednesday U.S. would contribute airstrikes to that fight if this Tikrit offensive goes well. (Video via Iraqi Defense Ministry)

"It is a dress rehearsal in that we’d anticipate any operation in Mosul would be led by Iraqi forces," White House Press Secretary Josh Earnest said. "We would envision a scenario where an operation against Mosul would have the possibility of being backed by Coalition airstrikes."