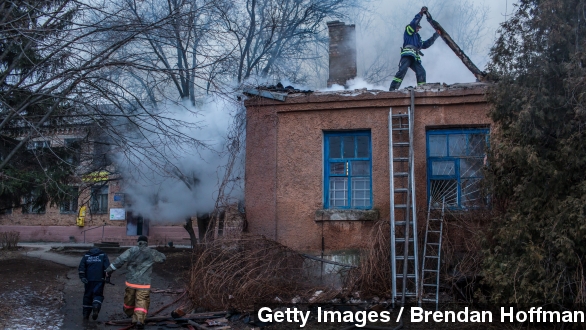 The cease-fire in Ukraine that went into effect on Sunday is already being tested.

Ukrainian President Petro Poroshenko officially ordered the cease-fire during a press conference, some 60 hours after the peace deal was agreed in Minsk, Belarus. (Video via Hromadske.tv)

But the city of Debaltseve, where separatist rebel forces have surrounded a strategic Ukrainian military position, looks to be a continuing source of contention. (Video via Euronews)

The Guardian reports it heard mortar fire east of Luhansk on the highway to Debaltseve, which rebels have targeted to try to cut off supplies to the city.

A reporter for The Telegraph described the situation like this, "Fighting continues around Debaltseve, if at a reduced tempo. Like last ceasefire, this has slowed the war but not stopped it."

And like the last cease-fire, the Minsk agreement from this past week included provisions that went beyond simply stopping the fighting. (Video via PBS)

Specifically, it included language that would establish a buffer zone by pulling heavy weapons back from the lines more than 30 miles. (Video via Radio Free Europe/Radio Liberty)

That could be difficult to do in Debaltseve, where Ukrainian forces are virtually encircled.

And as The New York Times reports, rebel leaders in the area have already said they won't honor the cease-fire in Debaltseve.

The Times reported Alexander Zakharchenko, prime minister of the Donetsk people's republic said, of the 8,000 Ukrainian soldiers in Debaltseve, "We will block all attempts to break out ... I have given the order." (Video via Deutsche Welle)

The move of heavy weapons back to create a buffer zone is set to begin on Monday.