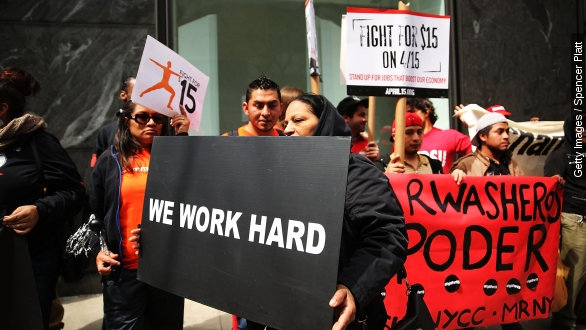 SMS
'Fight For 15' Wage Crusaders Protest On Tax Day
By Meredith Miller
By Meredith Miller
April 15, 2015
Members of Fight for 15 call for minimum wage workers to be paid at least $15 an hour, and they're rallying on Tax Day.
SHOW TRANSCRIPT

Thousands of minimum wage workers walked out of their jobs on national Tax Day in an effort to make one of the country's biggest minimum wage protests ever.

The group, known as Fight for 15, is calling for all minimum wage workers to be paid at least $15 per hour. It chose Tax Day for the protest to highlight that many minimum wage workers are on public assistance while many of the corporations that employ them get tax breaks.

The Fight for 15 movement has quickly gained momentum since its start in 2012 in New York City.

The group has made some headway with San Francisco, Seattle and SeaTac, Washington, already raising the minimum wage to $15 in the past year.

McDonald's, Wal-Mart, and T.J.Maxx also recently announced increases in their employee wages by about a dollar per hour, but for many workers that's still not enough.

"The workers don't have enough money, so that is why we are here. The money we are getting right now, $8.75, is not enough," a fast food worker told WPIX.

The Fight for 15 demonstrations will stretch across the nation to more than 230 cities and college campuses this Tax Day.

The campaign is expected to go global, with demonstrators in New Zealand, Tokyo and Brazil joining in solidarity.

The fight that started with many fast food workers has now grown to include home health aides, retail employees, child care workers and airport employees.

"Well, we've been inspired by fast food workers across the country pointing out how broken our economy is," said one professor who's part of the Fight for 15.

There is, of course, another side to this debate. A website called The Faces of $15 was launched in response to the protests and displays the struggles of employers who have had to offset the costs of raising wages.