Fifty Years On, The Voting Rights Act Is Still Controversial 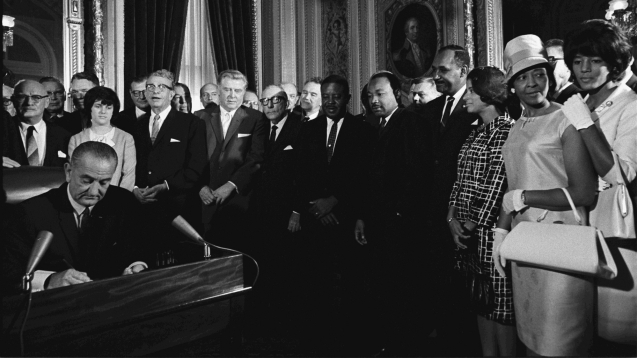 Fifty years after the still-controversial Voting Rights Act was enacted, President Obama wants Congress to update the law. (Video via The White House)

"On the ground, there are too many ways people are discouraged from voting. Some of the protections that have been enshrined in the Voting Rights Act itself have been weakened," the president said at a press conference Thursday.

You probably won't find many people who are completely happy with current voting registration rules. The problem is, no one can agree on how the laws should be changed or even what the main issue is.

On Wednesday, a federal appeals panel found a Texas voter ID law violated the act. The law required a government-issued ID to vote.

The Texas law is just one of many battles the Voting Rights Act has faced in recent years. In 2013, the Supreme Court struck down part of the law that allowed for federal oversight in states with a history of racist voting laws.

According to the Brennan Center for Justice, 113 bills have been introduced this legislative session that are focused on adding requirements in order to vote; only one has been passed and signed. On the other hand, 12 bills have been passed this year to expand voter registration.