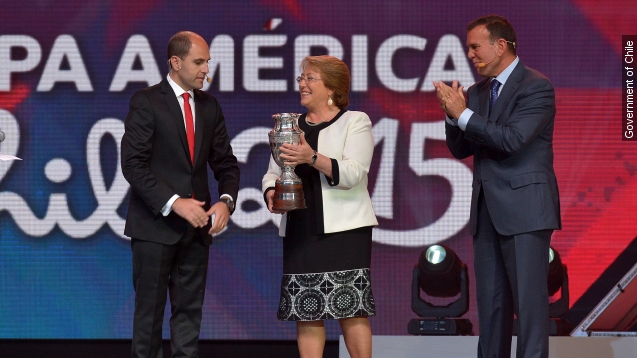 With a solid win over Australia, courtesy of two goals from Megan Rapinoe, the U.S. kicked off its Women's World Cup campaign this week.

And while all eyes here in the U.S. are on that competition, at least part of the world will likely be tuning into another competition that starts this week as well. (Video via FC Kansas City)

That's right: the Copa America. The world's oldest and, some might argue, weirdest international soccer competition kicks off in Chile on Thursday, but its future after this year is uncertain. (Video via Copa America Organization)

It's weird for a couple reasons. The body that organizes it, CONMEBOL, doesn't actually have enough teams to neatly divide into groups and has to invite two other countries: Mexico and Jamaica this year.

And stuff like this happens: Last tournament, Paraguay made it all the way to the final without winning a single game.

Paraguay is incidentally the home of CONMEBOL, one of FIFA's six confederations, and where it operated — until recently — with complete immunity. (Video via ABC Color)

But you might recall the Department of Justice recently hit FIFA with a huge corruption indictment. Yeah, that's going to affect the next Copa.

"It was announced today that the U.S. will host the Copa America soccer tournament for the first time in 2016," a WPLG anchor said.

So both of the guys who announced it, then presidents of CONMEBOL and CONCACAF, have been arrested as part of the DOJ's indictment. (Video via WPLG)

In the wake of those arrests, the president of the U.S. Soccer Federation, Sunil Gulati, has said it's hard to say if that'll still happen. (Video via ABC)

CONMEBOL's current president, not yet indicted or arrested, hasn't exactly been reassuring, saying some things need to be "revised." (Video via Fox Sports)

Still, because the costs are lower and the U.S. wouldn't need to invest in new stadiums, there's some flexibility when it comes to hosting the Copa America.

And with the future of FIFA still up in the air, international soccer kind of has more pressing issues to deal with. (Video via CBS)

This video includes images from Getty Images and Jimmy Baikovicius / CC BY SA 2.0.