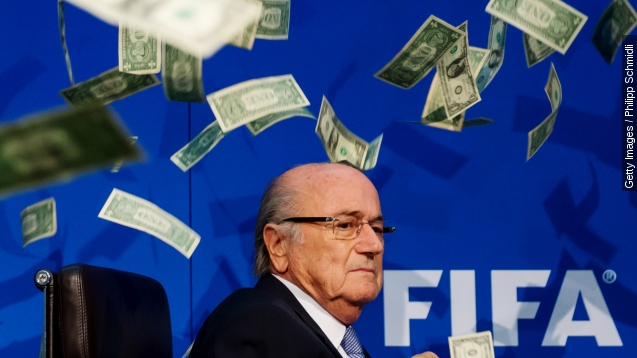 Sure, Sepp Blatter's admission that there was an arrangement made prior to a vote on who would host the 2018 and 2022 World Cups seems like a shocking revelation.

But it's also entirely believable, given FIFA's power structure.

Blatter told state-owned Russian News Agency TASS, "For the World Cups it was agreed that we go to Russia because it's never been in Russia, eastern Europe, and for 2022 we go back to America."

As FIFA president, Blatter essentially had the run of the executive committee, which decides where to hold the World Cup. Using his influence to direct the committee's decisions is legal unless it's backed up with bribes — something Swiss authorities are currently investigating. (Video via Deutsche Welle, RT)

The suspended FIFA boss also claimed the U.S. lost the 2022 World Cup because of Michel Platini, the also-suspended president of Europe's soccer federation and a man Blatter criticized extensively in the interview. (Video via France 24)

Pinning the widely unpopular decision to give Qatar the 2022 World Cup on Platini could be yet another move to discredit him and deflect blame. But it's not a new story. (Video via Press TV, The Guardian)

Back in 2013, magazine France Football alleged then-French president Nicolas Sarkozy pressured Platini into lobbying for Qatar at a meeting with Qatari royalty. The magazine also alleged that Qatar buying Sarkozy's favorite club, Paris Saint Germain, was also discussed — that became a reality in 2012.

Blatter said Russia won't lose the 2018 World Cup, although he didn't say the same thing about Qatar in 2022. Either way, it won't be up to him: FIFA will elect a new president in February. (Video via Al Jazeera)