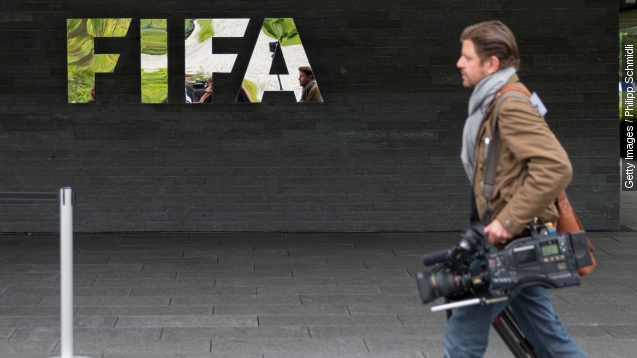 For a country that doesn't care all that much about soccer, outside of the World Cup, the U.S. just dropped a bomb on the sport's governing bodies.

The Department of Justice announced Wednesday morning it had indicted nine officials from FIFA, which most prominently runs the World Cup, as well as five other corporate executives with ties to the game.  (Video via CBS)

Swiss authorities arrested seven of the indicted in Zurich, to be extradited, including the current president of The Confederation of North, Central American and Caribbean Association Football (CONCACAF), a FIFA-affiliated conference that includes the U.S. (Video via RT)

The D.O.J. announced a slough of charges, including racketeering, wire fraud, and money laundering conspiracies, many of which were associated with schemes over selling TV rights for the World Cup. (Video via ESPN)

FIFA officials had convened on Zurich to vote in its presidential election, with current President Sepp Blatter widely expected to win reelection. (Video via ODN)

In response to the arrests, FIFA complained about the timing, but said they were a good thing. (Video via FIFA)

FIFA also said Wednesday's arrests wouldn't affect the 2018 and 2022 World Cups, but in a separate investigation, Swiss authorities announced their own investigation into the bidding process for those World Cups. (Video via ABC)