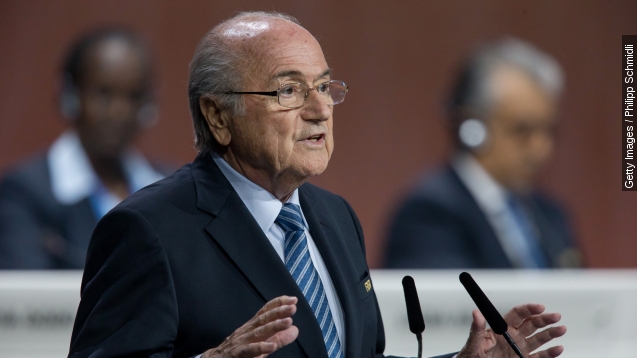 This despite U.S. and Swiss investigations into the soccer organization, which have cast doubt on the governing body's leadership. (Video via ABC)

The Swiss investigation centers around the bidding process for the 2018 and 2022 World Cups, which have been awarded to Russia and Qatar, respectively. The U.S. investigation and arrests earlier this week center around charges of racketeering, wire fraud and money laundering. (Video via PBS Newshour)

After 17 years as FIFA's president, many expected Blatter would win the election without issue. He isn't facing charges, but he has yet to be cleared in the investigation.

But there was still some level of uncertainty. In an interview with NPR's Robert Siegel, the president of the Barbados Football Association said voters from CONCACAF — a FIFA-affiliated conference that includes the U.S. — weren't as sure as they once were about voting for Blatter after this week's drama. (Video via CBS)

"When we came here on Monday, we were all going to vote on block for President Blatter. ... But since the development yesterday, it has brought a cloud onto that decision that we made prior to hearing the news," Barbados Football Association President Randolph Harris told Siegel.

The presidential election marks the end of the 65th FIFA Congress. Next year's conference will take place in Mexico City.