Fidel Castro Makes First Public Appearance In Over A Year 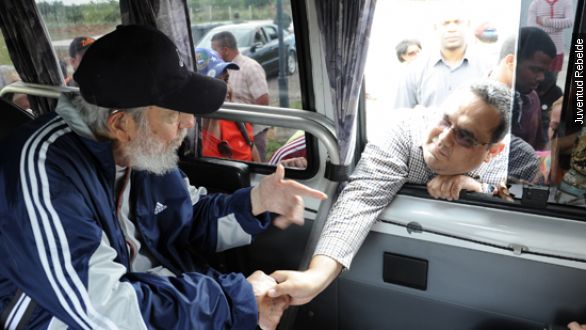 SMS
Fidel Castro Makes First Public Appearance In Over A Year
By Kate Grumke
By Kate Grumke
April 4, 2015
Cuba's state media has posted pictures of former leader Fidel Castro in public. It's the leader's first appearance in over a year.
SHOW TRANSCRIPT

Fidel Castro has been sighted in public for the first time in months.

The writer made sure to point out El Comandante’s strong mental and physical health.

The papers said the Venezuelans Castro met remembered he was, as they put it, strongly shakings hands for hours, and said the way he remembered names of delegates, governors and well-known people “inspired admiration.”

The last time Castro was seen in public was at an art gallery in January 2014. He was seen walking with a cane and accompanied by a man identified as his personal physician.

Any long stretch of time Castro isn’t in the public eye typically inspires rumors of failing health and even death.

But just because Castro hasn’t been seen much in public doesn’t mean he’s been avoiding the limelight. The traditionally vocal leader has spoken out recently about tensions between the U.S. and Venezuela.

Back in February, state-run Cuban media reported Venezuela’s President, Nicolás Maduro, visited with Castro and talked “about the world.”

Then in March, after Maduro gave a speech condemning President Obama’s executive order that imposed sanctions on some Venezuelan officials, Castro sent a letter to Maduro congratulating him on his “brilliant and brave speech in the face of the brutal plans of the U.S. government.”

So the fact that these newest photos show Castro meeting with Venezuelans is no coincidence. The article made a dig at the U.S., saying, in Spanish, that Castro was attentive to the realities of being Venezuelan, “especially now that the great nation has become the target of imperial greed.”

But so far, Castro’s opinion hasn’t stopped talks on the renewed relationship between the U.S. and Cuba from moving forward.

After all, it’s still his brother Raul Castro who’s in charge and has been since 2006.

The latest round of talks about normalizing the relationship between Cuba and the U.S. wrapped up this week in Washington.