Fewer Coaching Jobs In Women's Sports Are Going To Women 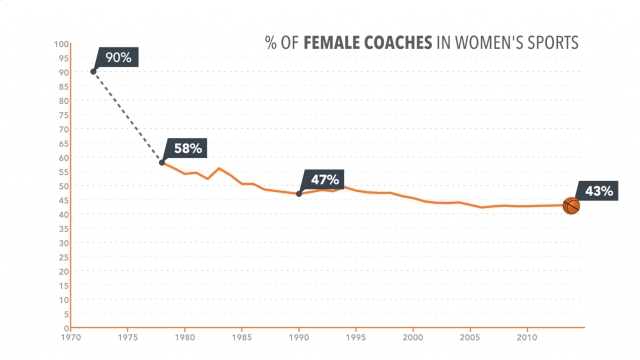 SMS
Fewer Coaching Jobs In Women's Sports Are Going To Women
By Zach Toombs
By Zach Toombs
May 18, 2016
In the 1970s, an estimated 90 percent of coaching jobs in women's sports were filled by women. Today, that figure is at 43 percent.
SHOW TRANSCRIPT

Where have all the women coaches gone?

Before Title IX went into effect in 1972, the vast majority of women's sports coaches at the college level were female. But that number then plummeted to only about half by 1990 — and only 43 percent today. As our partners at Reveal report, that number shows no sign of rising.

Between 2000 and 2014, NCAA schools created more than 2,000 new head coaching jobs in women’s sports. But they went to men 65 percent of the time. Ironically, this came after Title IX, the law aimed at eradicating gender discrimination in education. Title IX created a lot of new coaching jobs, but it only protected female student athletes. It did not protect female coaches, so when new jobs were made the vast majority of them went to men.