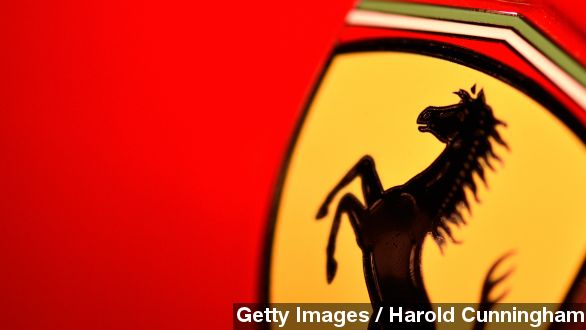 With Ferrari’s initial public offering coming in June, the Italian luxury car maker has released its latest toy. Sure to cure any mid-life crisis you might be dealing with.

Ferrari has finally unveiled (in pictures anyway) the turbocharged 488 GTB, which boasts a rear-mounted V8 engine and 670 horses under the hood. How fast do those horses run? Zero to 60 in three seconds flat. The 488 GTB tops out at 205 mph.

This new model from Ferrari is meant to mimic the original mid-rear-engined V8 model from nearly 40 years ago, the 308 GTB. (Video via YouTube / TheItalianCarChannel)

Back in September, Ferrari made a promise that all its new models would be either turbocharged or hybridized, and sticking with this “going green” mission the 488 GTB comes with a turbocharged engine.

Turbocharged engines — much like hybrid cars — generally have better fuel economy. AutoTrader describes the turbocharger as “like having two engines in one: a small, economical engine for ordinary driving and a responsive, high-performance engine for passing and such.” (Video via YouTube / Thomas Schwenke)

There’s no word yet on the price for this new prancing horse, but you can safely assume it will cost more than the car it’s replacing – the 458 Italia. The base price for the 458 is $243,000.

Ferrari will give consumers a chance to see the 488 GTB in person for the first time in March at the Geneva International Motor Show.