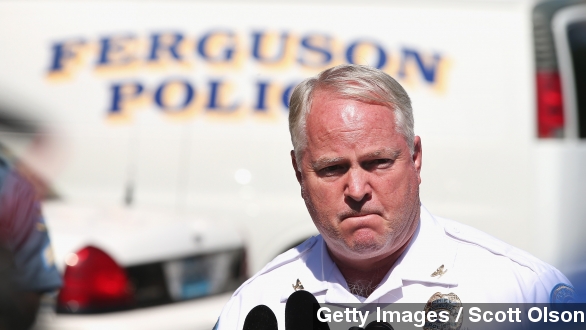 The Ferguson, Missouri Police Department and Officer Darren Wilson are not expected to face charges for the shooting death of unarmed black teen Michael Brown, but big changes to the department could still be on the way.

The New York Times reports the U.S. Justice Department found Ferguson police have been "disproportionately ticketing and arresting African-Americans and relying on the fines to balance the city's budget." As a result, Ferguson officials will need to negotiate a settlement with the DOJ or face a civil suit.

"These findings will basically target the department for a pattern of behavior against minorities," CNN's reporter said.

Ever since Brown's death, Ferguson police have been criticized for discrimination against the city's black population.

Even though the majority of Ferguson's population is black, white officers make up 50 out of 53 officers on the city's police force, according to reports in August.

The New York Times reports black people make up around 63 percent of Ferguson's population, but account for 86 percent of traffic stops and are more likely to be searched than others.

"I think it's pretty clear that the need for wholesale change in that department is appropriate," Holder said on C-SPAN in October.

But those changes likely won't come until after the full investigation is released.

Ferguson Mayor James Knowles III has criticized Holder for lack of communication during the investigation. Knowles was quoted by The New York Times as saying last week, "How come they haven't told us there is something that needs to be changed as they found it? Why have they allowed whatever they think is happening to continue to happen for six months if that's the case?"

It's unclear exactly when Holder and the Justice Department will make the investigation public, though it's expected sooner rather than later. With a successor named, Holder is expected to step down in the coming weeks.