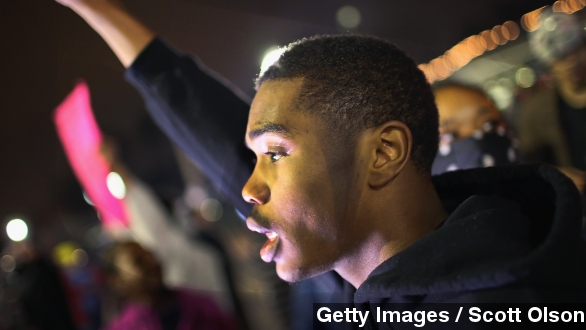 Nearly two days after two officers were shot in Ferguson, Missouri, police are still looking for the shooter.

The officers were shot during a protest rally. Neither of the men sustained life-threatening injuries and both were released from the hospital shortly after the incident.

Police say they are investigating multiple leads but have not yet filed charges against any suspect. (Video via KMOV)

"At 3 o'clock in the morning we heard boom, boom, boom. It's fifteen police he said 'we know you're in there, we ain't leaving till you come out," said Iresha Turner, who was questioned by police following the shooting.

Police searched a home and took three people in for questioning Friday but no charges were filed.

Authorities are now offering a $10,000 reward leading to the arrest of the person or people responsible for the shooting.

Protests continued in the days following the shooting with many of the participants calling for calm but vowing to continue pushing for change.

But tensions mounted yet again in Ferguson after a report from the Department of Justice alleged a pattern of institutionalized racism existed within Ferguson's government.

"Our review of the evidence found no alternative explanation for the disproportionate impact on African Americans other than explicit or implicit racial bias, no other basis," Attorney General Eric Holder said.

The St. Louis County Police Department and Missouri State Highway Patrol have once again taken over protest security instead of the Ferguson Police Department. The Ferguson police chief, city manager and a judge all stepped down following the release of the DOJ's report.