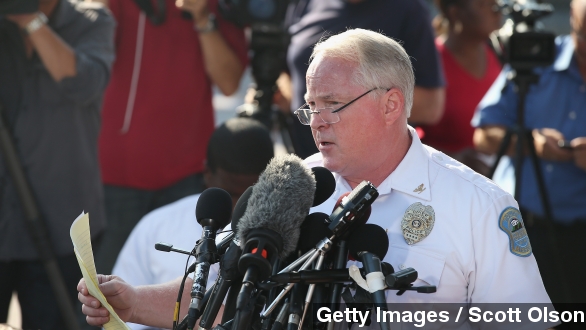 In a letter obtained by the St. Louis Post-Dispatch, Jackson said, "It has been an honor and a privilege to serve this great city and to serve with all of you," and his resignation is effective as of March 19.

Jackson is one of three Ferguson officials who got the worst of the Department of Justice's report last week. (Video via C-SPAN)

The report accused Jackson of using the Ferguson Police Department as a revenue generator, citing one email from a city official saying, "I did ask the Chief if he thought the PD could deliver 10% increase. He indicated they could try."

The two other main officials criticized in the report have already stepped down. Judge Ronald Brockmeyer resigned his position on the Ferguson Municipal Court Monday, and City Manager John Shaw announced his resignation Tuesday evening. (Video via KMOV)

There's been public pressure for Jackson to step down ever since a white Ferguson police officer shot and killed unarmed black teen Michael Brown in August. There was even a CNN report in October that he was resigning.

But that turned out not to be the case. Jackson continued to head up the department while the DOJ carried out its investigation. (Video via KSDK)

Fox News and NBC reports claimed Jackson was ready to announce his resignation, while CNN reported he wanted assurances that his department wouldn't be dissolved first.