Beyond Ferguson: Where 'The Wheels Of Justice Turn Slow' 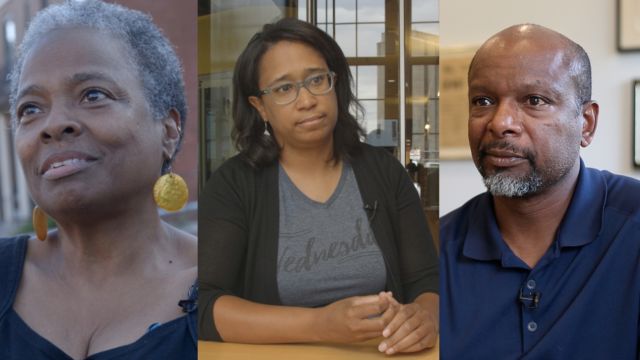 SMS
Beyond Ferguson: Where 'The Wheels Of Justice Turn Slow'
By Jamal Andress
By Jamal Andress
August 9, 2016
A year into its mission, the Ferguson Commission has learned that identifying problems and fixing them are two very different things.
SHOW TRANSCRIPT

The Ferguson Commission has been doubted from the beginning.

"People would say, you know, 'This Ferguson Commission is just for the political cover; nothing's going to happen. I'm skeptical about it,'" said former commission member Daniel Isom.

"How can you come up with solutions if you don't have everybody at the table?" said Cool Valley Mayor Viola Murphy.

Missouri Gov. Jay Nixon tasked the volunteer group of activists, educators, police officers and other St. Louis citizens with producing a report to help fix all the issues that pushed Ferguson, Missouri, into the national spotlight two years ago. But the commission has learned identifying problems and fixing them are two very different things.

"This work is kind of like an onion where you think it's hard, you think it's unflinching — then you peel back another layer. … We are actively partnering with about 25 organizations and have another 70 who have reached out to us to say, 'What do you think of this?'" said Nicole Hudson of Forward through Ferguson.

Community leaders say the partnership approach is an improvement from the usual attempts at reform.

"What Starsky Wilson did ... he started reaching out to organizations that are actually doing the work in the community and asking which of these recommendations line up with your work? ... And that was pretty powerful," said Jamala Rogers of The Organization for Black Struggle.

Hudson said: "The work that needs to be done to implement the calls to action in the report is built off the work people have been doing in this community long before the commission ever existed."

So far, the most tangible accomplishment from the commission is the Missouri Senate bill SB 5, which dealt with court reform and was signed by the governor last summer.

The bill caps fees for minor traffic violations and prohibits throwing people in jail for failing to pay those fees — two problems outlined extensively in the Ferguson commission's report. SB 5 was the one proposal out of many that actually made it into law — and some say even it was toned down.

"There were 40-something pieces of legislation that went in that dealt with court reform, police issues. And out of 40-something, one of them came out, and it was a watered-down version, and then a judge seven months later struck most of that down, so when people see that, that's pretty discouraging," Rogers said.

But Hudson says she believes the people who have chosen to work on this cause don't have any room to complain.

"But even in that, this is work that we're kind of choosing to do and opting into, and the people who live the reality of the problems that we're trying to solve every day don't have an option whether to work on it," Hudson said.

Rogers said: "You want to get the reform, but along the way, the bigger part is how you're organizing people to change the reality. ... The wheels of justice turn slow."

The committee has thrown its cause into the competition for the MacArthur Foundation's $100 million grant called 100&Change. Finalists for the grant won't be announced until the summer of 2017.

Music is courtesy of APM Music.