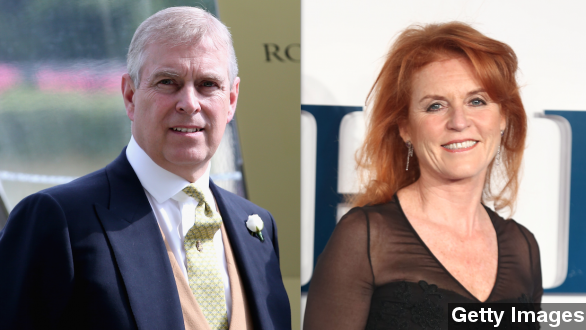 SMS
Fergie Defends Prince Andrew, Will Palace Take Legal Action?
By Lauren Zima
By Lauren Zima
January 6, 2015
Prince Andrew's ex-wife has spoken out amid allegations he had sex with an underage girl. The controversy is complicated, so what will the palace do?
SHOW TRANSCRIPT

Another defender of Prince Andrew — this time, his ex-wife.

The prince has been accused in a Florida court filing of having sex with an underage girl years ago, but Buckingham Palace firmly denies the claims. (Video via CNBC)

And now the Duchess of York, Sarah Ferguson, told reporters:

“The York family are a tight unit. ... He is the greatest man there is.”

Although the two are split, they're still close — they'd been on vacation in a Swiss chalet with their two grown children. The prince returned this week.

For him, the accusation is more of a PR nightmare than a legal issue, at least for now.

"Prince Andrew is not being sued; he's not being prosecuted. As a legal matter, he's not in any jeopardy," ABC legal analyst Dan Abrams said.

Basically, the prince was named in a lawsuit. Multiple women, including one named Virginia Roberts, claim billionaire Jeffrey Epstein abused them, and Roberts says Epstein forced her to have sex with his powerful friends.

She says she had sex with the prince when she was a teenager. They've at least met — they were photographed together in 2001.

Buckingham Palace said this week the prince has never had sexual contact with Roberts, and her legitimacy is certainly being questioned.

Harvard law professor Alan Dershowitz, who was Epstein's lawyer, is also named in the filing. Roberts says Dershowitz is one of the men she was forced to have sex with, and he's fired back in court.

"I don't know this woman. I've never met her. I've never been with her. ... I filed a sworn statement in which I not only categorically deny everything, I go through each of them. ... She's a serial liar," Dershowitz told CNN.

Roberts told ABC she is an "innocent victim." She's reportedly planning a tell-all and has also said she's met the Queen of England, which the palace has denied.

The lawsuit, filed against the U.S. government, is over a plea deal Epstein struck in 2008 when he pleaded guilty to procuring a minor for prostitution. His case was controversial, with accusations by the media he'd been given special treatment by the court.

USA Today explains that while the lawsuit was filed back in 2008, on Friday, Roberts and another unidentified woman were added to it. The suit says these women weren't consulted about Epstein's case and should have been.

Prince Andrew stayed friends with Epstein despite his conviction, further embroiling the prince in scandal. It's unclear right now whether the palace will take any legal action over Roberts' claims.