The Number Of Women Dying Of Cancer Could Double By 2030 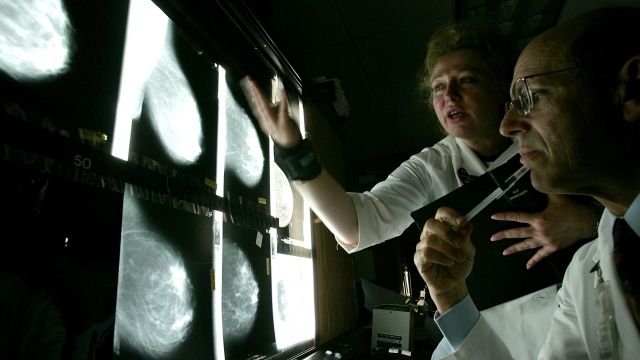 SMS
The Number Of Women Dying Of Cancer Could Double By 2030
By Ryan Biek
By Ryan Biek
November 3, 2016
A majority of the cases would be breast cancer.
SHOW TRANSCRIPT

Two new reports point to an alarming increase in the number of women that could die from cancer in the near future.

Researchers predict that by 2030, 5.5 million women could be dying from cancer every year. According to the American Cancer Society, that would be an almost 60 percent rise in deaths over just two decades.

The majority of these deaths would likely come from breast cancer. Another recent report predicts breast cancer diagnoses could almost double by the year 2030.

Many of these deaths would occur in low- and middle-income countries. Far fewer cancer cases are diagnosed and treated in poor countries, leading to more deaths.

The Disease Control Priorities Group says introducing a basic cancer control program, including preventative care and early diagnosis efforts, in low- and middle-income countries would cost less than $2 per capita.

But it's not all about screening and treatment. Researchers note as countries improve economically, the women in those countries will be exposed to other cancer risk factors more commonly seen in wealthy nations –– like obesity and physical inactivity.

A majority of these deaths would reportedly occur among young and middle-aged adults, though, which would put a strain on national economies.

Worldwide vaccinations against cancer-causing viruses, like the human papillomavirus, could also help prevent the dramatic rise in cancer deaths.