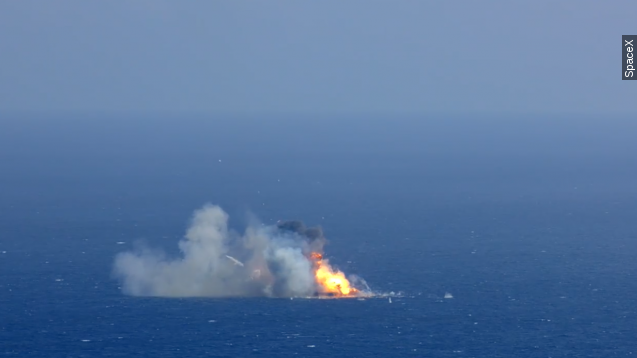 SMS
Feel SpaceX's Pain With A Rocket Landing Sim
By Evan Thomas
By Evan Thomas
September 19, 2015
This little flash game could give you a better idea of just how difficult landing a rocket from orbit is.
SHOW TRANSCRIPT

Rockets are the most expensive part of spaceflight.

SpaceX, as you might have seen, is therefore trying to crack the puzzle of reusable booster hardware. (Video via SpaceX)

SpaceX says each of its Falcon 9s costs as much as a commercial jumbo jet, and it wants to reuse them the same way.

The closest we've come to that ideal would probably be NASA's solid rocket boosters, which it recovered for refitting after space shuttle launches. (Video via NASA)

Actually saving the whole rocket is much easier said than done. But don't take our word for it.

Now you, too, can experience the unique frustration of melting through billions of dollars of space hardware.

This game, submitted to MIT's Scratch animation library, gives you the controls of a Falcon 9 and a simple objective: Land without exploding. See why SpaceX lets the computers handle this? (Video via Scratch)

Consider what the company is trying to do, but don't use the jet analogy. Sure, jets might have hard landings, but they're nothing compared to what a Falcon 9 first stage goes through. (Video via Em S / CC BY 3.0)

It's doing Mach 10 at separation, and has to flip itself around and relight its engines to slow down and make a controlled fall back to Earth from 50 miles up.

Its target is an unmanned barge — 30,000 square feet floating in the Pacific, on which it must land upright.

Yeah, if SpaceX does get the tech working, it would be the first time a launch system would get to reuse its entire first stage.

It was going to make a third try in June with its CRS-7 mission. But that launch ran into some slight issues, and SpaceX has yet to detail when its next landing test will be. (Video via SpaceX)