FedEx Set To Compete In Europe With $4.8B TNT Express Bid 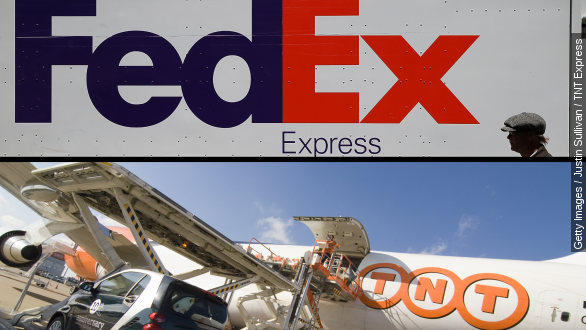 SMS
FedEx Set To Compete In Europe With $4.8B TNT Express Bid
By Jake Godin
By Jake Godin
April 7, 2015
Shipping giant FedEx has announced its bid to buy Netherlands-based TNT Express in an effort to expand in Europe and compete with UPS and DHL.
SHOW TRANSCRIPT

On Tuesday, the delivery service announced it shelled out a whopping $4.8 billion in cash for Netherlands-based shipper TNT Express.

If the deal goes through — and TNT's board has already signed off — the deal will significantly increase FedEx's reach in Europe and make it the continent's third largest shipper. (Videos via FedEx & TNT Express)

And yet, that's around 15 percent less than what UPS offered TNT before getting shot down by antitrust regulators back in 2013. When asked about those regulators in a press conference, FedEx's president in Europe, David Binks, said the company wasn't worried. (Video via UPS)

"We're very confident," Binks said. "Let me just say this. We know there are two strong players in the marketplace. Now there will be three."

The biggest advantage FedEx has going for it over UPS is that both FedEx and TNT, even combined, are still smaller than UPS and DHL in Europe, meaning regulators are not as likely to make a fuss over antitrust issues. (Video via FedEx)

Nonfinancial stipulations in the deal ensure employment terms within TNT will remain in place and the headquarters for the combined companies in Europe will be in Amsterdam. (Video via TNT Express)

Pending any regulatory hoops and hurdles, the companies expect the deal to finish in the first half of 2016. (Video via FedEx)

This video includes images from Getty Images and FedEx.