Federica Mogherini Is A Busy Woman 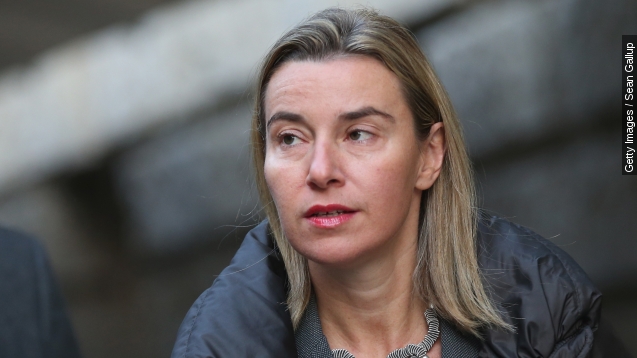 This is Federica Mogherini. (Video via Italian Government)

You usually see her in the news whenever the European Union is in the spotlight: most recently during the Mediterranean migrant crisis. (Video via Sky News)

So what does Mogherini do? Well her official title is High Representative of the Union for Foreign Affairs and Security Policy / Vice-President of the European Commission.

That usually gets whittled down to "head of foreign affairs" or "foreign policy chief," because that's her most visible role: hobnobbing with diplomats, giving joint press conferences, stuff like that. (Video via U.S. Department of State, RT, European External Action Service, Office of Prime Minister Benjamin Netanyahu)

But she does a lot of other stuff too. As the E.U.'s website puts it, her duties are "wide-ranging."

That includes trying to make the 28 different countries in the E.U. get along, mostly through monthly meetings between the member countries' foreign ministers.  (Video via European External Action Service)

She's also the Union's representative in all international affairs, including at the United Nations and with foreign countries. (Video via United Nations)

On top of that, she's the head of the E.U.'s defense agency, which means she was one of the people in charge of coordinating E.U. member countries' response to January's attacks in Paris, and talking tough to Russia over the conflict in Ukraine. (Video via CBS, Radio Free Europe/Radio Liberty)

What all of that means is Mogherini is essentially the go-to woman for anything that involves the E.U. working together, or trying to at least. So yeah, she's a busy woman. (Video via EUX.TV)

This video includes images from Getty Images and music by Christian Bjoerklund / CC by NC SA 3.0.