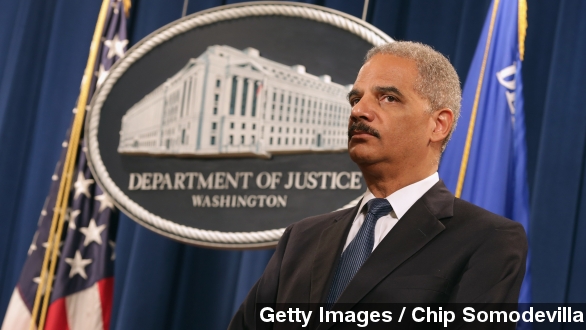 The Department of Justice's new rules on racial profiling, reportedly five years in the making, seem timely, given all the protests against police violence.

But the rules don't broadly apply to local law enforcement, the actions of which have been at the center of much of the unrest, with the deaths of men like Eric Garner and Michael Brown sparking the demonstrations. (Video via New York Police Department)

The rules, which previously banned profiling on the basis of race, now also ban federal authorities from profiling by religion, national origin, sexual orientation and gender identification, although this doesn't apply at the border or at airports. (Video via ABC)

Attorney General Eric Holder has been pushing for new rules on profiling since 2009, but has met resistance in the past from federal law enforcement agencies like the FBI. (Video via U.S. Department of Justice)

Much of the coverage of the new rules has pointed to the nationwide protests against police violence as a reason for the new rules' relevance.

CNN's Evan Perez said, "The new rules for federal law enforcement have been in the works for five years, but they're more relevant than ever given that protests around the country about police conduct."

"With everything that's happening in Ferguson and Staten Island I think these things are seen as much more explosive because of what's happening elsewhere," MSNBC's Jane Timm said.

But police in the killings that led to the protests wouldn't be affected by the new guidelines anyway, and, again, there were already Bush-era racial profiling guidelines in place when the killings happened. (Video via The New York Times)

And that's precisely the objection the American Civil Liberties Union had for the new guidelines on profiling, telling Politico the revision is a positive step, but a "nationwide ban on this unconstitutional practice is in order."

Holder is set to brief local and state law enforcement on the new guidelines on Monday.