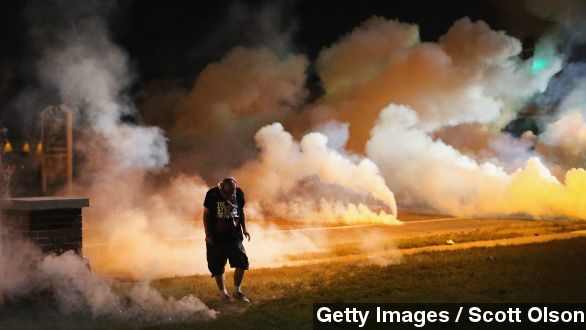 The temporary restraining order, uploaded by the St. Louis Post Dispatch Thursday evening, imposes new guidelines for when and how police can use tear gas.

The use of tear gas by police during the Michael Brown protests has been widely criticized, with some saying it was unnecessary and used arbitrarily. (Video via Fusion)

Now before police can use tear gas, they must first issue "clear and unambiguous" warnings, give protesters sufficient time to heed the warning before deploying tear gas, minimize the tear gas’s effect on peaceful protesters and, finally, ensure it's safe for people to leave the gassed area.

The St. Louis Post Dispatch quotes U.S. District Judge Carol Jackson as saying, "There was no distinction drawn in the way peaceful protesters were treated and the way criminals were treated, even though the police do make those distinctions in other situations."

There were six plaintiffs in the case, which revolved around an incident from Nov. 24 when protesters were tear gassed while taking shelter in a cafe. (Video via YouTube / David Maness)

Speaking with MSNBC, one of the lead lawyers for the plaintiffs in the case explained that using tear gas to disperse a crowd without giving them a chance to, well, disperse, encroaches on people’s First Amendment rights.

"So you're punishing people, and the effect of that punishment is to chill their First Amendment rights."

But speaking with the Riverfront Times, St. Louis Metropolitan Police Chief Sam Dotson said his officers do give warnings — they're just in the form of police saying, "This is an unlawful assembly, please leave the area" over a loudspeaker.

BuzzFeed points out this decision is an important win for the not-as-TV-friendly court side of protest movements. An earlier victory was scored in October when a judge ruled out the police use of a five-second rule in getting protesters to disperse.

Thursday's restraining order is set for a preliminary injunction next month.