FDA Has A New Warning About Overcooking Your French Fries 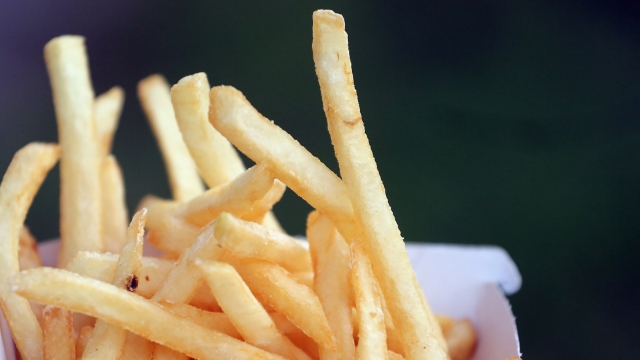 SMS
FDA Has A New Warning About Overcooking Your French Fries
By Christian Bryant
By Christian Bryant
March 11, 2016
New FDA guidelines describe how acrylamide, a potentially harmful chemical, can form when certain foods are cooked at high temperatures.
SHOW TRANSCRIPT

The Food and Drug Administration has issued new guidelines to reduce a potentially cancerous chemical that can form when certain foods are cooked at high temperatures.

The chemical acrylamide might not sound familiar, but where it's found might. Acrylamide has been known to primarily form in potato products, like French fries and potato chips, but it can also form in grain-based foods, breakfast cereals and toasted bread.

Acrylamide was first discovered in 2002, and it can form when foods are cooked at high temperatures — think frying or baking.

The chemical is potentially harmful because it has caused cancer in lab animals, and according to the FDA, it's "reasonably anticipated to be a human carcinogen."

An FDA chemist says removing acrylamide from your diet isn't necessary or possible because it's so widespread. The Grocery Manufacturers Association reports the chemical is found in 40 percent of the calories the average American consumes.

But reducing acrylamide is relatively easy. The FDA recommends following manufacturer's preparation suggestions, and no matter how you like your fries or toast, cooking until light or golden brown is recommended over a darker brown.

This video includes clips from McDonald's, Williams-Sonoma, YouTube / Nicko's Kitchen and the Food and Drug Administration.