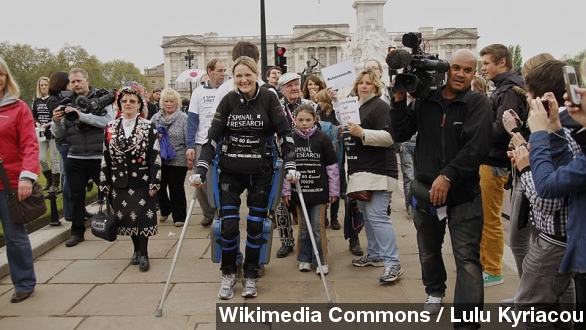 The ReWalk was developed by Argo Medical Technologies in Israel. It was previously only available to patients during rehab, but now can be sold to anyone for use in their day-to-day life.

The device consists of a fitted, metal brace that supports the legs and part of the upper body and motors that supply movement at the hips, knees and ankles. It weighs 46 pounds but users only feel the 6 pound battery, worn as a backpack.

"It took me from no hope to saying 'Boy, now I'm getting my own independence back again.'" (Via WFXT)

Patients use crutches for additional stability and a remote control on their wrist to command ReWalk to stand, sit or walk. (Via WLBT)

According to the CDC, there are 200,000 people in the U.S. with a spinal cord injury, many with complete or partial paraplegia. An FDA official said the ReWalk is a gamechanger. "Along with physical therapy, training and assistance from a caregiver, these individuals may be able to use these devices to walk again in their homes and in their communities."

Being able to stand upright also aids circulation, digestion and muscle tone, which are common problems for people with paralysis. (Via NBC)

However the device does have it's downside. It costs a whopping $69,500 and the FDA warns users risk pressure sores, bruising, falls and hypertension. (Via Bloomberg)

But for some, the reward is worth the risk.

"Being able to stand and give my wife a hug. Being able to walk with my children to the park. These are things that we take for granted and I miss." (Via CBS)