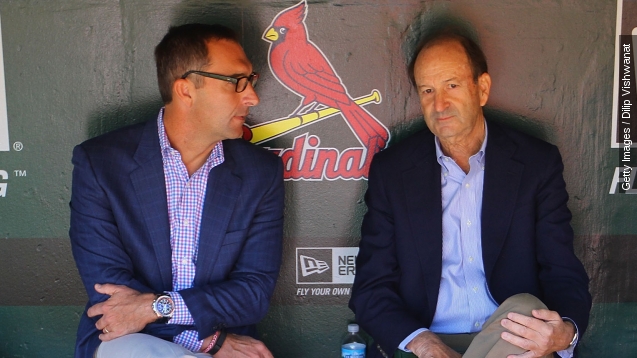 The St. Louis Cardinals may soon have more problems than who's in their starting lineup. According to The New York Times, the team is under investigation by the FBI for allegedly hacking the Houston Astros.

The New York Times writes: "Investigators have uncovered evidence that Cardinals officials broke into a network of the Houston Astros that housed special databases the team had built, according to law enforcement officials. Internal discussions about trades, proprietary statistics and scouting reports were compromised."

The report doesn't detail exactly when the Cardinals might have allegedly hacked the Astros. The two sides, though, certainly have been close in recent history.

The Cardinals and Astros were division rivals in the NL Central from 1994 to 2012 until Houston joined the American League.

The investigation is reportedly over stolen scouting reports and current Astros General Manager Jeff Luhnow might have been the target.

Before joining the Astros in 2011, Luhnow worked for the Cardinals' scouting department in various roles from 2003 to 2011 — responsible for drafting players at one point. (Video via WXOS)

The New York Times report says the alleged hacking was from "vengeful" employees looking to "create havoc" on Luhnow's work.

The Astros haven't seen as much success as the Cardinals in recent years, but Houston's currently first in the AL West and owns one of the youngest, most talented ballclubs in the league.

"The group of players that are here provide us not only a lot of insurance for this year, but a lot of future promise for years to come," Luhnow told The Fresno Bee.

The Astros have been vulnerable to leaked information before. Last year, 10 months worth of Astros trade talks between front office officials were leaked to Deadspin.

The New York Times report says none of the employees being investigated has been suspended or fired by the team. MLB says it's aware of the FBI investigation.