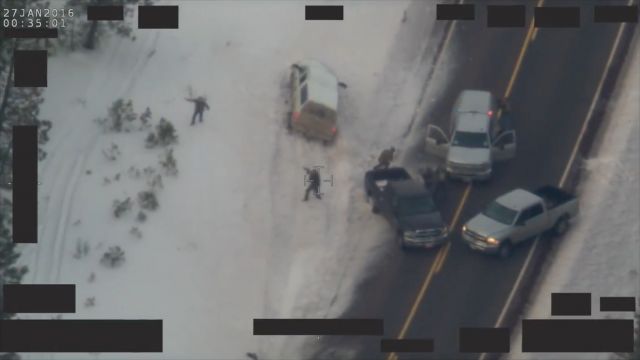 The Federal Bureau of Investigation has released footage of the shooting death of LaVoy Finicum, a spokesman for the occupiers of the Malheur National Wildlife Refuge.

The video shows Finicum speeding away from authorities in a white van, eventually overturning at an FBI checkpoint. He then emerges from the vehicle with his hands up, but reaches for his waistband twice before being shot by an Oregon state trooper. Officials later confirmed Finicum was armed at the time.

Finnicum was killed after authorities stopped a vehicle containing militia leader Ammon Bundy and several of his followers Tuesday. Bundy was arrested along with seven other supporters.

The FBI also confirmed there are still four people holed up in the refuge. According to Oregon Public Broadcasting, David Fry, Jeff Banta and husband and wife duo Sean and Sandy Anderson are still inside the building.

After being taken in, Bundy asked the militants to leave in a statement through his lawyer. "I love you. Let us take this fight from here. Please stand down."