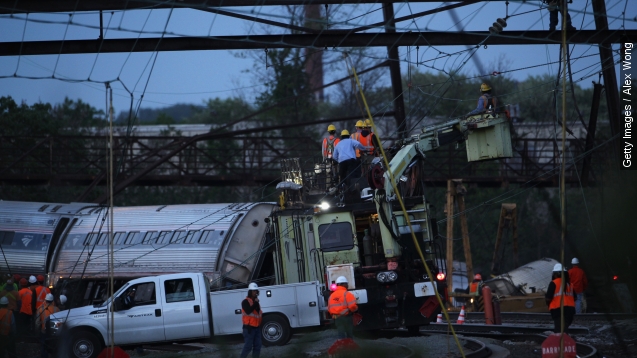 SMS
FBI Probes Reports Of Object Hitting Train Before Crash
By Matt Picht
By Matt Picht
May 15, 2015
The NTSB has called in the FBI to investigate reports of an object which allegedly hit the Amtrak train in the moments before it derailed Tuesday.
SHOW TRANSCRIPT

First, the NTSB interviewed the engineer of the train for an hour and a half, and gave him a positive report card.

NTSB spokesman Robert Sumwalt told reporters, "Our investigators found the engineer to be extremely cooperative. ... He demonstrated a very good working knowledge of the territory."

Second, the FBI is being called in to investigate reports the downed train was hit with a projectile shortly before the crash.

"She also believed that she heard her engineer say something about his train being struck by something," Sumwalt said.

An assistant conductor on the train told the NTSB that shortly before the crash, she heard her engineer radio that the windshield of his train had been hit by an object. She also said at least one other nearby train reported being struck by a projectile as well.

The Amtrak train derailed Tuesday night near Philadelphia, while rounding a curve at over twice the speed limit. The engineer told the NTSB he has no memory of the fatal crash; the derailment has sparked discussion about Amtrak's safety systems as well as infrastructure investment.

The FBI is inspecting the front of the crashed train for any sign of projectile damage, and the NTSB is reviewing the radio transmissions and video from the nearby trains. The FBI previously ruled out terrorism as a cause of the crash after a brief investigation Wednesday.