FBI Letter To MLK Shows Sinister Side Of Government Spying 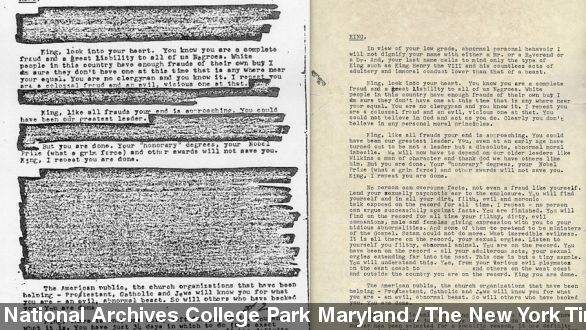 One of the larger stains the FBI has ever had to endure on its not-so-spotless record was revealed in its entirety Thursday. A letter asking Dr. Martin Luther King Jr. to kill himself — signed, sealed and delivered by J. Edgar Hoover's FBI.

The letter was discovered by a Yale history professor who penned an op-ed for The New York Times. Beverly Gage notes the letter occupies "a unique place in the history of American intelligence — the most notorious and embarrassing example of Hoover's F.B.I. run amok."

The letter — now known as the "suicide letter" — refers to the leader of the civil rights movement as "sexually psychotic," "a dissolute abnormal imbecile" and a "fraud." It ends with the famous warning, "You have just 34 days. ... There is but one way out for you. You better take it before your filthy abnormal fraudulent self is bared to the nation."

The letter along with a purported audio tape of MLK's extramarital affairs was sent to the King home and discovered by his wife, Coretta Scott King. Dr. King assumed the letter and tape were from the FBI and his after his death a Senate committee confirmed as much. (Video via ABC)

In an age where whistleblowers like Edward Snowden have exposed just how far agencies like the NSA or FBI can reach, the newly released full version of the suicide letter is worrisome to many. (Video via NBC)

And Vox calls the letter "a terrifying reminder of what government surveillance agencies can be capable of."

FBI Director James Comey acknowledged this blemish in the FBI's past when he was first introduced as director, telling the crowd: "I'm going to direct that all new agents and analysts also visit the Martin Luther King Memorial here in Washington. I think it will serve as a different kind of lesson, one more personal to the bureau, of the dangers in becoming untethered to oversight and accountability."

This video includes and image from Getty Images.