FBI Has Identified 'Jihadi John,' But Says Little Else 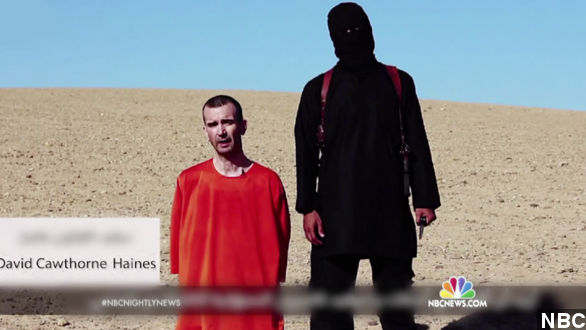 SMS
FBI Has Identified 'Jihadi John,' But Says Little Else

By Christian Bryant
September 25, 2014
The FBI chief declined to give further details about the ISIS militant with a British accent, including what his name is or where he's from.
SHOW TRANSCRIPT

The identified ISIS militant is the man who speaks with a British accent in the beheading videos of American journalists James Foley and Steven Sotloff, and British aid worker David Haines. (Video via NBC)

But Comey didn't give many more details, only saying that the FBI knows who the man is. He did not give the man's name, his whereabouts, his nationality, or a definitive answer whether the ISIS militant seen in the video is the same man who carried out the executions.

Last month, The Guardian reported the masked man was the head of a group of British fighters in Syria and was also one of the main negotiators for hostages.

A few days later British Ambassador to the U.S. Peter Westmacott said the British government was close to identifying the man:

"We're not far away from that."

The Washington Post said since then, U.S. intelligence has ruled out at least one person who was believed to be the masked executioner — a rapper of Egyptian decent who traveled from London to Syria last year.

The Post added, "Authorities have been using voice analysis to try determine the killer’s identity but another U.S. intelligence official said the FBI was able to identify the killer using other means."

And while the U.S. and other nations continue to move against ISIS, CNN points out bringing the executioner to justice means one of two things:

"Either he'll be brought to justice on the battlefield or through the legal system."

Comey said the FBI's focus isn't just on the supposed killer, but also the more than 100 Americans who have reportedly traveled or attempted to make their way to Syria. He suspects a dozen are still fighting with terrorist groups.