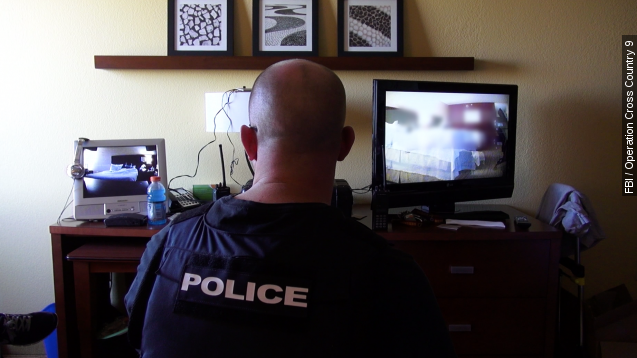 More than 150 alleged pimps are behind bars and 149 children were rescued after a nationwide child sex trafficking sting called Operation Cross Country. (Video via FBI)

The sting, which was carried out last week, focused on rescuing underage victims of prostitution. The operation spanned 135 cities with more than 500 law enforcement officers involved.

FBI Director James Comey said, "When kids are treated as a commodity in seedy hotels and on dark roadsides, we must rescue them from their nightmare and severely punish those responsible for that horror."

We know that globally human sex trafficking is a huge business. The International Labour Organization puts profits at $32 billion annually. Some estimates say the U.S. accounts for $10 billion.

But in reality, these numbers are nearly impossible to track. It is an underground issue afterall.

Worse, statistics on the number of sex trade victims are stale. The FBI still uses some numbers on its website that date back to studies conducted nearly 15 years ago.

"Runaway juveniles are particularly vulnerable to being led into prostitution because they've run away from possibly a bad family situation and then get pulled into drugs or a gang lifestyle that leads to prostitution," Alexandria Police Department spokeswoman Crystal Nosal said.

The National Center for Missing & Exploited Children says one in six endangered runaways reported to the organization last year were likely victims of sex trafficking. Most victims believe their "controller" or "pimp" to be an intimate partner. (Video via CNN)

More than 4,800 children have been rescued from underage prostitution since the FBI launched its "Innocence Lost" initiative in 2003 to stop child sex trafficking.