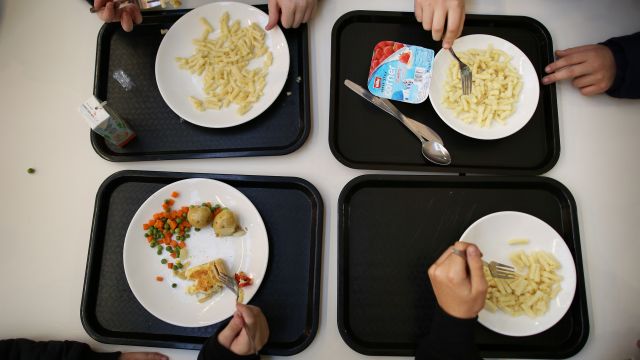 An Alabama father is frustrated after his son's elementary school sent the boy home with a stamp on his arm that read, "I need lunch money."

The boy's father, Jon Bivens, says when his third-grader returned from school with a stamp, he thought it was an encouraging note. When he looked closer, he saw what it really read.

According to AL.com, Bivens said: "They herd these kids like cattle. When you start stamping a message on a child's body instead of calling ... it's not okay."

According to the school's principal, the lunchroom department uses various methods to communicate with parents when a balance gets low, including emails, notes and stamps.

But according to Bivens, he didn't get any prior warning. He told ThinkProgress: "I can't think of one logical reason why anyone would stamp on a note on a child's arm. We have so much technology and multiple ways to communicate."

We've seen this kind of controversy before. A Denver-area elementary school principal says she lost her job fighting against her school's policy of stamping students whose balances were low.

In a 2014 interview with a local TV station, she said: "The kids are humiliated. They're branded. It's disrespectful. Where's the human compassion? And these are little children."

The Star Tribune reports school districts in Minnesota also use stamps this way.

In the Alabama case, the principal said the school will no longer use stamps for Bivens' son and any other students whose parents object, saying, "We want to communicate in a way that our parents are happy with."